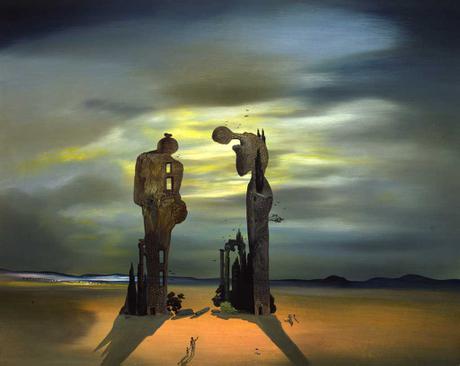 at the end of each working day they stand in their humility on that same earth and against that same sky as the bell tolls. at least that is millet’s version. their humility is often mistaken as an obedience to a religious ritual, but is there anyone that hasn’t pledged their obedience to something; a society, a brand, the church, a government? others may say that they are humbled by their impoverished life, but it’s easy to forget that the hand of poverty can weigh just as heavy as the hand of wealth.
much of this kind of moralistic rhetoric becomes invalid when investigating the wider inherited landscape. it conforms to the age old paradigm of judging for the so-called purpose of justice. the unfortunate component of this type of argument is that there are a few things amiss with justice; most notably that justice is something wielded by those in power often to maintain their power. another issue that arises is the need of most to justify their behaviour and by extension their existence.

if we suppose that only a future history can truly judge our arrogant conduct, we will have to look forward to an image of a deserted landscape punished by nature and the passing of time.

in countless situations as before, human existence have been made difficult; disasters, famine, war, disease. how do times of abundance and times of adversity cycle, if at all? are they not just a random and perpetual part of life which we assume to have control over?
adversities have been around since before the ten plagues of egypt, but our capacity to deal with the uncertainties resulting from it has never been as wanting. centuries of study and science have promoted the illusion of our control to such an extent that it has almost become a modern law of nature; the loss of a certain humility has been a sad casualty of this process.
the neo-pessimism of today might well just be a complaint against previous years of plenty instead of a premonition of imminent disaster. if mankind has had a single driving force it would be ‘more’. we’ve always wanted more, more peace, more satisfaction, more food, more minimalism, more wealth, power, control and more happiness. frankly more life.
now that the securities of religious beliefs or faith in capitalist corporate economies have faltered and government systems have deceived us, it seems all our progress has turned the earth to ashes.
building on past paradigms will clearly fail in alleviating this condition and attempts to use them will only result in a prognosis of ever downward spiralling proportions.

those who cannot remember the past are condemned to repeat it.

do we truly own our freedom or are we living in commercial captivity? if leaders, whom we used to trust and elect through choice are now eclipsed and manipulated by corporations and economies, is the only vote with cause and effect not to choose as a global market?

much maligned as it may be, the inevitable answer may lie in adopting a form of peasantism again. by choice or cataclysmic intervention; all apocalypse survivors face the same fate.
the humble pair in the painting; with heads bowed, a light of hope shines above them onto the man and child looking up at them. the poignancy of dali’s picture cannot escape us, as if to say; but for the reminder of these monuments we would not have seen another day. we are halfway there already it seems.

historically peasants have had a bad wrap, but consider tolkien’s heroes, the hobbits or millet’s gleaners, or bruegel’s wedding guests. consider the complacency of their meagre existence. today however, many will argue that their own lives are so much better.
peasants have always been seen as economically insecure, and pictured as victims of the ever changing seasons,
suffering daily labours for long hours and paying large contributions of their work to the estate of their lord and to keep the aristocracy well fed.
often in exchange for protection and certain limited freedoms,
and even so, peasants would sometimes revolt.
call it pessimistic realism or realistic pessimism.

the axiom: to consume and to be consumed.
a fact of the worldly cycle is that there has always been those who suffer while the rest are living it up, disasters befall one group while others see their share prices rise. furthermore the definition of the contemporary quality of life has since had a serious upgrade - it used to be that living in peace with shelter and food and means to do so another day was enough, but lately it seems that without a microwave and being the ceo of something your life is just deemed a failure, even your followers say so.
it is seldom the fault of technology or science, just as it is seldom the fault of ideologies or religions - it is always the fault of the abuser, the abuser of power as much as the abuser of freedom. our question is not who should be held responsible, because we already know the answer. therefore the question should be how we hold ourselves responsible.