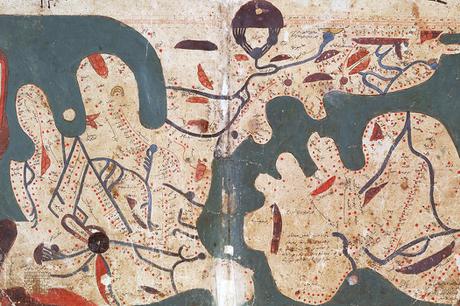 this, though contrary to the title is mostly about the past-
all that we anticipate is from a place in the past;
where we come from,
where we’ve been and where we are going.

this is perceived as a linear thread which we try to follow as time unfolds before us. we use it to alleviate our uncertainties of tomorrow and what is to come. this thread however is far from linear, it winds around places in times of which only what remains is remembered.
it’s not about a nostalgia but rather like tracing the routes we have covered on our own map.
much may still be learned from those who have vanished and from ourselves.
of course we can blame the past, but we can also use it to reassure and to understand;
our relative position in time, our dreams and nightmares, even our failures and solutions.
this is why the past is an inadmissible part of our investigation of the future.

hardship is another inevitable condition, and the experience of hardship is relative. in the future this disparity will increase rather than diminish. why can we be so certain of it you ask?
is it because all science fiction predicts it,
is it because the dystopian has always been part of mankind
is it because of the promises of hollywood, heaven or hell?

humans have always been motivated by fear more than anything else; since sumerian times the sky has always been falling in some way or another in perfect counterpoint to redemption, hope and salvation. regardless, the persistence of being has as such always been hanging by a thread.

cocteau famously said that ‘not to be’ is our natural condition, that we ‘are not’ for much longer than what ‘we are.’

our existence and those of others are often evaluated along the lines of this hardship and fear. quality of life and standard of living is equated to not having any of that shit but rather having stability (a key concept in modern economy). we often forget that nature abhors a vacuum and thus provides chaos. our survival therefore would require constant change.

change is always difficult, but still everyone always imagine the road will lead somewhere;
that the destination will be a relief. a path taken, completely resolved, as if virgil himself has shown us the way.
at the beginning it is always difficult to conceive, the new out of nowhere.

we pride ourselves on a capacity to create, evaluate and anticipate things, yet that with which we occupy most of our time seldom has anything to do with our future. it may well be true that we are only slaves of probabilities. we value our own freedom and continuously complain about it being threatened. it may be that there are more than one type of freedom, but i suspect we may play some part in terms of restricting our own.

i would like to explain this through a few simple thoughts about choices; those we make and those we don’t.

through conditioning or circumstances you may have a preference of what you’d like to eat. this may be from the season or because of availability. it may be religious or ethical reasons, it may be the only thing you have in the kitchen. there are many reasons why you are about to put that in your mouth and expect a certain result: sustenance, satisfaction, sensation or even the alleviation of stress.

this everyday event tends to produce a vortex of considerations to navigate through; the politics of food.

in the meantime your hunger may be mounting and ultimately an urgency will step in, narrowing your options and steering you into the inevitable. an illusion of freedom.
in a society of means often the easiest way out is habit or convenience and perhaps your choice has been influenced by more than just the practical reasons.

our gluttony results only in small hits, getting more tasteless the more we have, which only make us crave more and more as the studies on sugar and salt consumption has shown. this could be viewed as a biological pressure, however, the use of this phenomenon by producers of food is another matter, let’s call that opportunism.
we are vulnerable to this opportunism through the industry’s close colleague ‘marketing’ which has become even more persuasive through its henchmen in social media.

all and all it is less of a natural action to choose what we eat than it appears. it would therefore not be unrealistic to assume that in future we may have no part in the decision.

if according to the old expression: necessity is the mother of invention,

we could assume that it would result in more invention during times of greater necessity.

nowadays it is called innovation. but this innovation is however only part of the picture. it is not always created from necessity, but also from self indulgence.

for most of us these are just little machines which are said to make our comfortable lives more comfortable, at least until they themselves are made redundant in the wave of new innovations. apart from pollution, these items don’t really add much to our livelihood, they often take more than they give.
and instead of freedom, they now become a purgatorial burden.

in other words; inventions which are not necessary.

entertainers on a whole should stick to their trade, the alternative is a confusion similar to a popular pet food suggesting a property investment.

it is unavoidable for us to be influenced by those persons we admire for their ability to amuse us, and we have arrived at a place in time where we are being amused more than ever before. to lend an ear or follow a fashion may all seem harmless, but as with any position of power, whether corporate, governmental or the entertainment industry, one has to assert one’s own convictions first before slavishly following their lead.

the challenge remains with evaluating what choices are really ours to make.