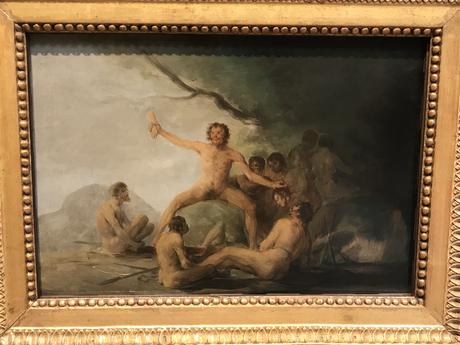 much has been said about goya, and certainly about his depictions of civilisation’s brittle veneer; sometimes they stab back through time like his ‘los desastres de la guerra’ to become a repeatedly grotesque reminder of mankind’s folly, for we must also consider that amongst our achievements, the necessity to inflict suffering has been seemingly quintessential. the main themes of goya’s work can be condensed into prophetic commentary on the consequences of man’s neglect of reason.

about 70 years before goya, baruch spinoza died. his writings on ethics contained a proposition which aims to clarify this dichotomy:

‘this endeavour, when referred solely to the mind, is called will, when referred to the mind and body in conjunction it is called appetite ; it is, in fact, nothing else but man’s essence, from the nature of which necessarily follow all those results which tend to its preservation ; and which man has thus been determined to perform.

about food there has also been said a lot. and continuously. commonly more about health and diet and as another quintessential element of existence, it naturally focusses on human preservation. the current down turn from excess, whether due to guilt or conviction of longevity seems in contrast to the fact that most people making these lifestyle decisions are the ones with options. some go meat-free without a choice.

thabazimbi is the name constructed from the local / native words for thaba (mountain) and zimbi (iron); an isolated rural mining settlement surrounded by the semi-arid bush in southern africa, where unsurprisingly iron ore is mined from a mountain; its face forever changed by greed. my father was stationed there and i did part of my engineering practical assignments there. my mother cooked and entertained. an annual event called the ‘wildsfees’ - loosely translated in to festival of game took place on dusty grounds outside the town. brawny game farmers proudly looked on as farmhands unloaded the slaughter - a gutted gazelle, any wild animal hunted and shot had to be used. copious cuts of game meat hung from hooks ready to be boiled or grilled to the delight of the townsfolk. with dozens of fires rising up into that autumn sky it was quite a primal scene and like the ash its memory has settled on me. my mother won an award for her ostrich stew.