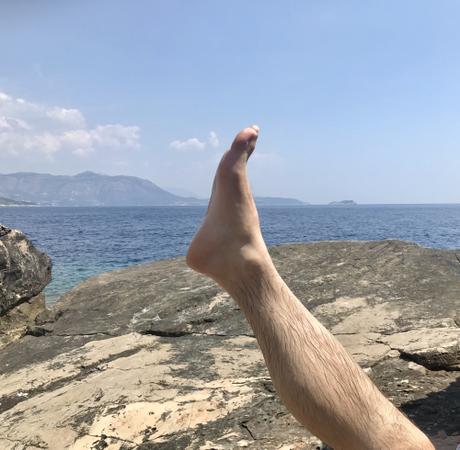 how easily we are sentenced to emotive response by images. clear they seem at first; only when we consider the moment do we realise the deceit.

he turned off the walkway, stumbling downhill rather awkwardly between the bushes and the uneven path. the sun was fierce and the heat was high although those sensations are gone; together with the scent of the pines. they are only words now;
like the reflection of light on the sea, the glare on the rocks and their flaky texture under his feet; describing the unforgettable.

a perfect moment as they lay together in the sun, the salty water evaporating from their bodies; skin on skin.

all that remains is an incomplete feeling designed from a single photograph.

the sound of the cicadas were deafening; the heat made bearable only by the shade of the trees, and the water. the calm but not cold water of the sea. it was a thirty minute walk to the harbour and almost as long a wait, but once the boat started moving, the salted breeze took all effort away; the island was the only destination and the only relief.

memories become like movies, frame for frame accompanied by sounds and songs. it’s all designed to evoke a feeling while disguising the moment. even those intimately perfect moments between lovers are marred by the knowledge of the film crew. the desperate cries of loneliness and despair are numbed by the knowledge that the d.o.p. is there to prevent our hero from bleeding to death.

the problem is closer to home, with our personal memories of those moments which prove so slippery although sincere. how can we capture the exactitude of it? perhaps not ever, perhaps it’s that elusion which makes us grasp so desperately at its illusion.

they lay together side by side, seeking the little shade afforded by the stony outcrop. they share a drink, they share so much more in that moment; they both remember it even though it has passed and will forever be past.