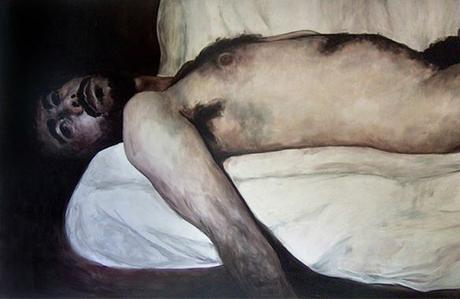 an invitation to ‘asymptomatic pictoplasma: flashbacks into contemporary art’, hosted at the swiss MACT & CACT Arte Contemporanea Ticino was enough to peak my interest.
piero paolo lucchetta stole the show for me; his portrayal of vulnerable masculinity pushed the right buttons. painterly melancholic, his style typifies a sensibility of nineteenth century odalisks in a contemporary context; the fatigue of modern conceptions of masculinity is challenged in a very humane and sympathetic way, the stare of the tired subject ruins the next videocam encounter. in a single picture he moves attraction to surrender; something which duplicitously begs to ask, hold me or fuck me.