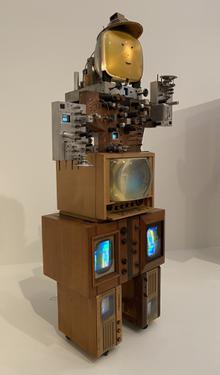 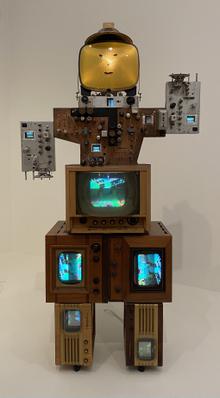 like a finger slowly pressing through the ether of time, nam june paik’s work almost evokes a mechanical response. but then standing on the edge of analogue space, the reaction is somewhat different when looking back. i suppose that is the destiny of visionaries, to be seen glazed in a static kind of museum-like substance and not as their dynamic selves.

the building of new electronic super highways will become an even huger enterprise
nam june paik, 1974

from where i’m standing with my phone taking pictures of his work, i at once wonder what he would have made of our digital communication era today, and at the same time what he would have envisioned already for 2045. to me nam june paik is more than just about technology, it is about time and the very servitude we as humans obey it with. his portrayals vibrate with a fear of the god we serve. we will be slaves in adoration, and so we have become what his prescient vision has dictated.
is it supposed to make us feel safe or scared. man is eternally destined to overstep his own boundaries, what becomes of it history foretells. do we learn from it and counter our lazy impulses, do we cease to seek dominance over whichever realm? do we use our powers and discoveries for good? what happened since the discovery of gunpowder, what will happen to our children?
the easy dissemination of information has made it suspect and the gluttony of entertainment has made us lazy, besides the fact that it has also created illusionary heroes and turned leadership to dust.
the true strength of this exhibition might be contrived from its timing; where we are isolated but for electronic connections, where mega-information transfers report and determine our values, where cyber and technological monopolies govern.
life imitating art becomes a poignant truism where paik’s work is concerned. it leaves you with an awe of his foresight, an optimistic nostalgia of the future of the past and invariably an intense dismay at what what has become an integral part of inter-human communication. gone is the novelty of his self-broadcasting buddah - as a pre-instagram image, absorbed and static in itself. now it is replaced by thousands of images flooding his prophetic ‘electronic super highways’ with equally empty stares and meaningless content.
i’ve had several unflattering things to say about the stedelijk museum exhibits in amsterdam in the past, and i would love nothing better than to break that pattern, however this is not the time.
there is a narrow section of the museum exhibition consisting of many small unimposing rooms in an enfilade-like succession. for some reason beyond me they choose to utilise these limited rooms for exhibiting the graphics and texts which require the most attention. it almost seems as if they would like you to spend as little time as possible in these claustrophobic spaces or they themselves find it unimportant to the exhibition or its visitors.
regardless paik survives this grievous oversight, the message comes across even though the details of his manifesto remains obscured. our relationship with technology is far from over, but across the landscape of time we are made aware of our impressionability towards it, and not all of it escapes our naivety.