as francis bacon said when he was asked if with his paintings he tries to depict shock and horror;

‘… the real horror is out there on the streets’. 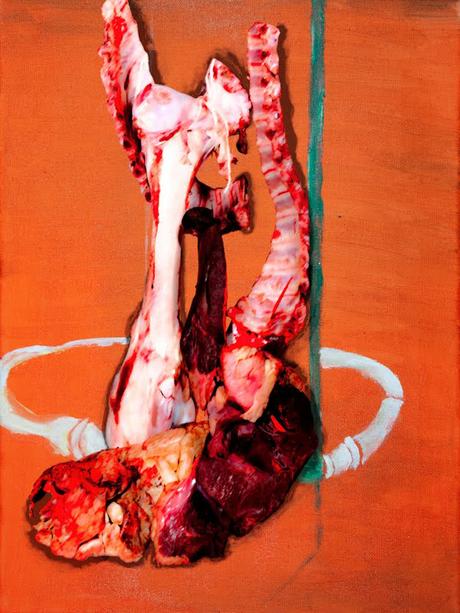 one of the benefits of winter and inclement weather is the fact that one ends up spending many more hours entertained by the avalanche of information from the internet. the mere word ‘information’ has evolved from something privileged which was generally viewed in a positive light to something a bit more ambiguous. i believe this to be a good thing though, thought is probably where the real poverty lies. not that i’ve had more than the usual dose of envy for the cool-crowd, but i’ve sadly realised that thinking is not cool, regardless of which generation you’re from, thinking is shrouded in a depressive cloud of negativity; it’s the kind of thing you do when others are having fun. the thinkers nowadays are called overthinkers (catch my drift?) who cycle somewhere between superficial revelations and teenage angst. our affinity for hyperbole is another constant gripe but that’s for another time. my issue is with the future generation out there and their awareness. perhaps it’s my protective parenting or my belief in childhood innocence which fuelled my interest with it at the beginning.

as part of my regime to stay warm, i chose to follow some of the teenage blogs (strictly < PG18) which enabled me to stay hot and bothered for the most part; not only because i have three children, but also because i fear it indicates a failure on the part of my and previous generations. i’m just flipping channels here but i also once mistook politics for leadership; the real deal is however far from it and even more confusing. suddenly the dark ages don’t look as dark from where i’m standing. the exposure of tender youngsters to a world filled with too much and too often contrary information just seems a tad negligent. i see them struggle with concepts even the more experienced among us have trouble digesting. i suspect the answer lies further from net-nanny or draconian censorship and closer to guidance which as far as i’m concerned leaves parents and google pretty much in the role of responsibility here. strangely we have come to a place where there are more children with access to google than have access to parents. one thought is not to ask if you are over 18 (which is codespeak for indemnity) but rather to compile a quick quiz to gauge if the user is mature enough it often doesn’t relate to age as a number but rather to an understanding. take the hashtag freedom search on social media to see what i mean; even i struggle to relate to this level of a fourteen year old french girl’s cynicism about the recent events in paris.

it made me consider the way we sell ideologies to our children: especially about money and freedom. money will always be money but it is strange how equally insular our definition of freedom has become. the phantom concept of freedom certainly has its price and although hailed as a messiah of democracy and thrown about like a wet rag, we have yet to understand what it really implies for future generations. for a great part, our history of violence is exactly that fight for freedom, which at last count suffered more casualties than the plague. perhaps freedom is not as important (and so not the same) as acceptance.
if i was such a fan of freedom as any of my liberal colleagues would have me be, i’d just let those be who choose to be different to me. the real horror of it lies in the elimination of cultural diversity which stifles all natural growth and we all know never to fuck with nature…
it’s the simplicity of the matter that strikes me most, the rationalisations of selfish agendas and for the most part ‘upholding our way of life and what it stands for’. there’s that wet rag again. freedom has a status quo to which all will (and i mean WILL) conform, it will be upheld and enforced to death. one heaven, one hell and one god. there you have the price we’ll pay for it; freedom itself. now i barely scraped through university math in my first year but plus one minus one still equates to nothing much to me.
perhaps i lack the eloquence to put this succinctly and perhaps it is just too idealistic, however the fact remains that consideration (the baby brother of thought) is often lost and it becomes too difficult to escape the hold of the current progrom of freedom fighting; defending our freedom by fighting theirs is a little blind, i’d say, but it certainly slots right into the capitalist ‘only the fittest survive’ formula.
and before you start with ‘you don’t understand the complexities…’ please spare me when you don’t even understand the basics.

and so to get back to our future i.e. the teenagers of today. no wonder they suffer disillusionment at the world they live in. no wonder they feel entitlement and anger; the sky is falling, security is becoming more scarce by the day and they have little to look forward to except to what they inherited, a selfish little social dystopia with a poisoned well. the gripe i have with the whole bloody set is that after various experiments and conflicts we still have to rise to the challenge and truly love our neighbours as ourselves and not only accept them when they become just like us (ref. marriage pour tous) which proves that equality works both ways.

these patronising ideological imperialist attitudes belong to centuries gone and contrasts too sharply with humanitarian sympathies for my taste. i come from a country where such propaganda has succeeded in laying waste to the inherent principles of its cultures; the resulting loss of identities and values have brought something else into the picture but i’m convinced it’s not a solution.
as far as propagating the paradigm is concerned, there are definitely no easy answers here and while the big guns are coming out, few are even considering the fact that we have made our own bed. the way we choose to live seems to me more stifling and conformist than our sensible ideologies predicted. common psychoanalysis points out the importance of self acceptance and the reciprocal acceptance of others and perhaps we shouldn’t see the disapproval of others as such a threat to our fragile existence; for if we truly have faith in our freedom wouldn’t we allow others their own?