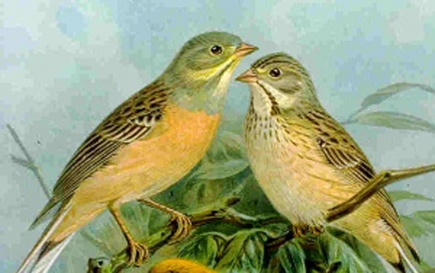 so after reading this piece of culinary history, i thought again about the strange preperation method, the even stranger ritual of consuming it and the ultimate pariah of enjoying it… l’ortolan.

Unless we are prepared to break the law, most of us will never know this paradisical experience, for these tiny European garden birds are now protected. The French chef M. Massialot (1702) described the ortolan as “a delicate Fowl of an exquisite taste, about the bigness of a Lark.” For centuries, in France, they have represented the abolute pinnacle of gastronomic experience. Francois Mitterand had them prepared (illegally) for what was his final fine dining experience before his death from cancer in 1996.

The famous chef, Alexis Soyer was briefed in 1846 to provide a dinner at the Reform Club in London, with “magnificent contempt of expense”. One of his inspirational thoughts was: “An ortolan can hardly be truffled, but I will undertake that a truffle shall be ortolaned!” Or, in other words he would cook “the delicate native of Provence .. gloriously interred in the choicest production of Perigord”. This culinary gilding of the lily did not eventuate; the birds were not delivered in time. Poor gourmets.

Poor birds: ortolans were caught and force-fed until they were “lumps of fat”, and were then suffocated (“take them by the Beak, and holding it close between your Finger and Thumb, the Bird will be stifled in about a Minute”), or drowned in Armagnac (super-gourmet method).

Soyer’s guests would not have needed instruction in the ritual of ortolan-eating. A large napkin covers the head and plate while the diner eats the whole bird (except the beak), with the hands. Depending on beliefs or sensibilities, the purpose of the napkin is to (a) capture the aroma (b) hide the messy process from other guests, or (c) hide the greediness from God.

As for cooking them, the method is simple. M. Massialot says:

Ortolans must be drawn, and roasted on a small Spit, and basted with a little Lard: Then they may be cover’d or strew’d with Bread and Salt, and eaten with Salt and Orange.