Fruits from the Forest 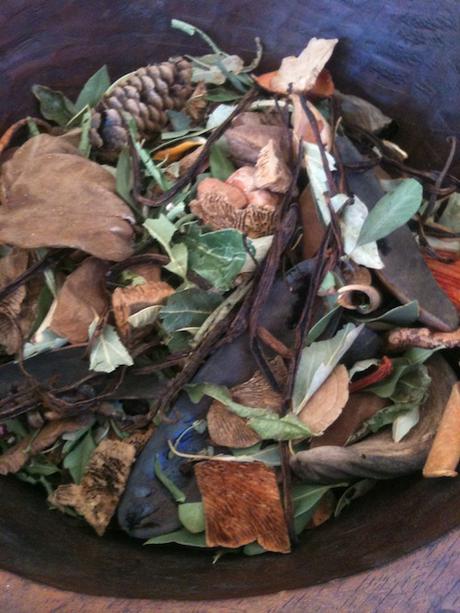 this is probably going to sound a bit martha, but i recently came upon a delightful recipe for odors in the home from a victorian home maintenance guide. yes, i admit to also having a mrs beeton somewhere on the shelf. i realised as i was reading it that i have most of the dried ingredients like aniseed, cumin and allspice as well as most of the plants growing in the garden needed for the mix. it is described as a very gentlemanly scent which naturally suited me fine; i love scented gentleman. the next thing was taking my eldest daughter, with her un-natural penchant for the outdoors, into the garden to forest for scented leaves and pods and early autumn clementines. this took most of the day, mostly due to the rescue of a lame grasshopper and gazing at the ants along the way; wrapping took the rest.
after picking, chopping and drying, two months later we assembled the ingredients and got some vanilla pod husks to boot. i’m sure there might be some dried out spider or ladybird in there as well. as a person more likely to sniff stuff from a bottle in an upmarket department store, i was quite pleasantly surprised. i have had a terribly foul allergy against any form of home industry after being exposed to my mother’s inglorious attempts at macramé, decoupage and such, but i must remark how surprised i was at the effect. one of my favourite designers: john saladino, has used bowls of this stuff in his interiors and even though it went through a stage of serious questionability as millions of english ladies went through the lavender craze during the laura ashley eighties, it took away the cigarette smell like a charm. i’ve spent millions on burners and infusers; although they are totally fabulous, i still had a super retro thrill cooking up my own pot-pourri and finding some containers for it, now if i could just stop sneezing…