latter day marketing has seemed to neglect the subtle for fear of ambiguity. why trust the reader with their own interpretations? you want to sell something. your idea, your product? moving toward louder and bigger probably catches on quicker. there is a point however, that needs to be made for clever. clever is not always clever, most of the time it’s stupid. looking at the propaganda style marketing reminds us that if beauty lies in the eye of the beholder, making it pretty catches that eye, the beholder and their wallets. complicated needs understanding, understanding needs time, time is money, and money is limited. simple enough?
since we are constantly faced with the booming voice of marketing, it has become more and more interesting how we are conditioned to read the media. in general this applies to the basic phenomena and media magic. want people to look, make it flash. middle aged, middle minded? put in a bit of aspiration to cure that middle feeling. you’ll be one of the 16 million special people out there that now distinguish yourself with a brand new whatever. some campaigns however just go way over the heads of the common denominator. many marketing firms maintain that it’s because most people are lazy. i maintain it’s because most people are stupid beyond anything we can learn from psychometrics or demographics.
word play just doesn’t seem to cut it in a society where people don’t read and the only reason they are able to find their way is GPS since a macbook is the last thing they read. language quickly changes to lingo and the chasm between the written and spoken word gets remedied by inventing a new vocabulary. what works is simple. some campaigns are superbly tuned to their audience and the layered witticisms are in line with the sentiments of the day. this is the mistake: if simple is not stupid, cryptic is disastrous.
here is a pic from the launch campaign of the monarch hotel in johannesburg, south africa. it was made possible by combining the fine styling and photography of the team from Dossier fashion magazine. since it may not be clear to everyone, this was done as an invitation to lunch. the monogram of the hotel is used in a homophonic attempt at cleverness. too bad. 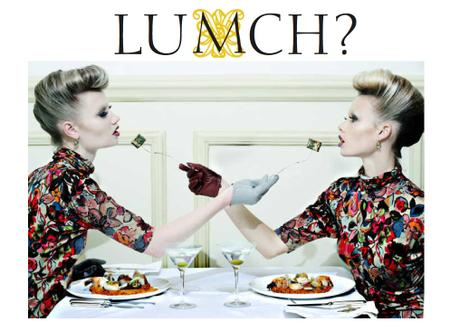 choosing continuity has its benefits in establishing brand identity. the trick is to continuously evaluate. if your point of departure misses your audience by even a millimeter the result of a complete campaign misses them with a mile.
the next one really got me. the campaign of this five star, fine dining establishment continues and in jest towards the impending financial recession, issues the following invitation for their dessert selection. 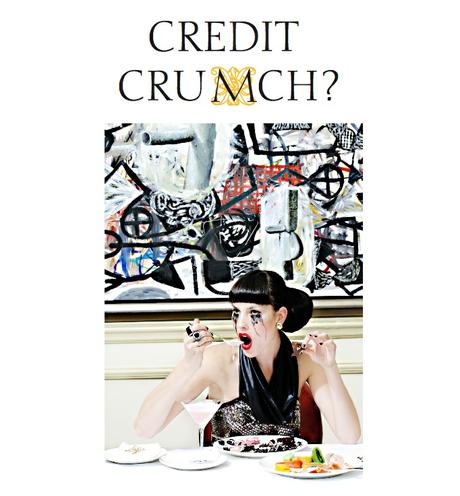 once again the campaign fell short of accurately assessing the interpretive capacity of the broader public. the real aim of it was to suggest spending your last credit on some scrumptious dessert and letting go of your financial woes. a guest that responded (or rather shrieked) that she saw the invitation as a discount special offered off the usually exorbitant pricing. she and her friend were bitterly disgusted with the fact that there were none, resulting in the realization that she’d probably have to live off stale bread and water for the next two months. now who is it again that you see crying in this invite?
the point: even if everyone speaks the same language, not everyone understands it.