everyone seems very concerned about the hypocrisies of the media and fake news while the truth seems like a needle in a haystack; quietly laying ready to prick you.

i am probably on a bit of an anti-anti trip to discover the reason why moral conformity has not extended into full force with prominent artworks being removed for their depictions of socially sensitive material and the inevitable insult of history it showers upon the frail public. the rijksmuseum re-titled many of their works a few years ago for exactly this reason, but the artworks still remain, and as my mother would say; a spade by any other name is still a spade.

in this i agree with cocteau who favoured mythology over history since history seems to be based on facts that are later turned to lies, whereas mythology is apparently all lies which eventually turn out to be true.

censorship has had a prime time lately and true to it’s founding dictum of ‘what you can’t see, won’t hurt you’ we have been suffering some serious editing fatigue. censorship may sound like a trending topic from the sixties but will probably only really fade when power and control becomes unfashionable. meanwhile… ‘you may not like it, but it’s for your own good’.

there were a few events which started off this journey. the first stop, was ironically the bus stop; and an ad campaign for iced coffee derivatives. 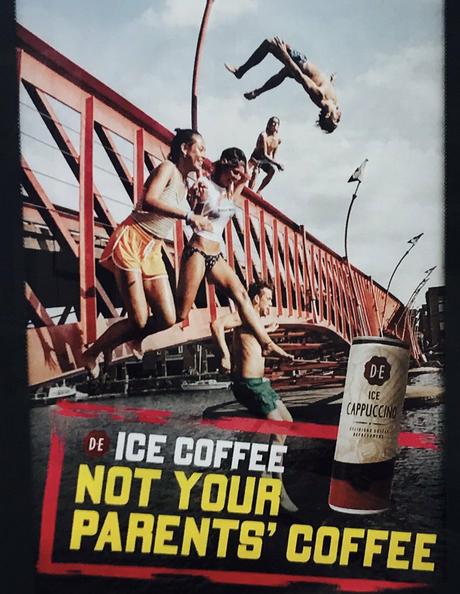 fortunately, although for the wrong reasons, the social responsibility police pulled the one above during the summer due to the the fact that it might lead people on to dangerous conduct, i.e. jump from bridges, the one below however schizophrenically remained, probably since they thought it wouldn’t entice people to venture onto a skating ramp (which incidentally is located just a block away from the ad) with a shopping trolley or perhaps such conduct is not deemed dangerous enough. 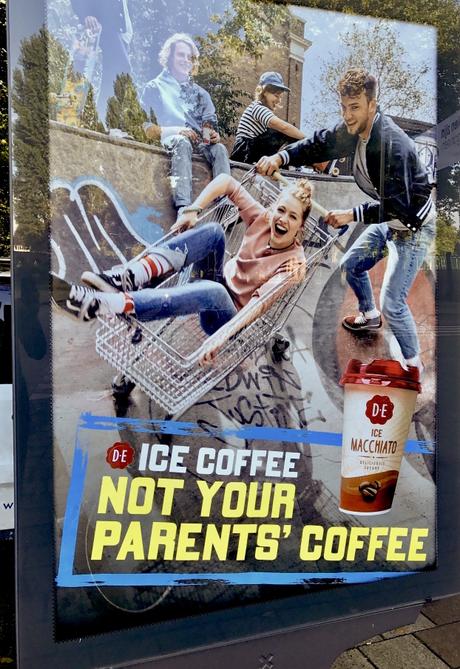 ps. luckily i’m not a parent that easily takes offence either.

my grandmother had a farm in africa… and on this farm she had a lamb… whose fleece was white as snow… anyway, she would cook this lamb on her old aga coal stove. for hours afterwards the stove would still remain hot and even though you couldn’t see it, you knew not to touch it.

the second worrying treatment was to prohibit ads for unhealthy foods in the metro stations, most of which are high sugar content products. next up; a movement to remove all soda’s with sugar content from vending machines in schools and only allow those with artificial sweeteners (which here is appropriately called ‘leugensuiker’ translated to fake sugar or more directly, lying sugar).

this is driven by a need for public health (or ‘volksgezondheid’ to use a more loaded historical term), aimed specifically at the youth and whilst these efforts are clearly honourable, i’m personally more in favour of a tell-it-like-it-is than the hide-the-banana approach.

the dilemma lies in promoting population health while still acknowledging individual’s rights to decide,
and although i agree that children should be protected, they should not be sheltered, instead they should be exposed and made aware.

true story: the grandmother of a friend suffers from dementia at an age of 90+. they removed the persian rugs in her house because she kept tripping over them but after her distress and repeated threats to call the police because she believes them stolen, the brother decided to put them back, he argued, ‘it’s better to try and keep her happy than to try and keep her alive’.

i came across an interesting article from 1906 in a dutch medical journal regarding the sugar/saccharine debate, which seems to indicate the initial reasoning behind allowing its manufacture as economic; the concerns about it’s effects were apparently filed in favour of the fiscus.

the one is an illusion of fascism, the other of an utopia; both very similar in my opinion.

i notice the general shock and horror with which some ‘liberatistas’ speak about conditions in authoritarian countries with draconian laws while the logic in programs by ‘progressive’ governments reflect a similar propagandistic edge. for accepting all this anticipated good we may eventually have to sacrifice some of our freedoms or, we could simply go jump off a bridge.