from the antlers album burst apart, i don’t want love. i just love their mellow industrial beats swoonly mixed with that quivering voice-from-a-can sound. totally poetic and mesmerisingly hypnotic. i can’t wait to get their latest album undersea out later this month… i am a picean after all.

it’s not exactly alain ducasse but i find the story of the imam fainting too romantic. imam bayildi is one of those dishes you can surreptitiously sneak into a menu as side or main dish. also it’s impervious to flop, which as a host i am naturally prone to - forgetting to take it out of the oven at the same time as offering ms r her favourite drink, or moving in some more chairs, adjusting the playlist or just checking my children don’t decide to play frisbee with the meissen. hot or cold, mushy or firm, it has become an addiction. the recipe is from the ever reliable peter sommer 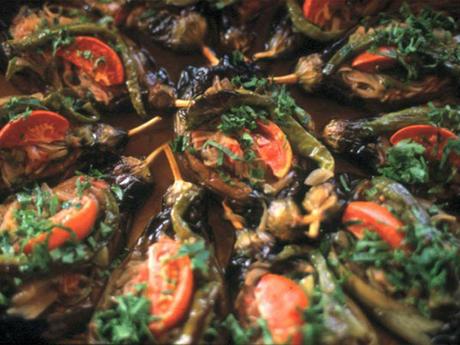 One of the most celebrated of all Turkish recipes. A light, succulent and truly scrumptious dish – part of Turkey’s wide array of ‘zeytin ya?l?’ (with olive oil) recipes. It is perfect for a snack, as part of a table of mezes (small plates or starters), or as an accompaniment to a full dinner.

Not only does it taste yummy, but it has a rich story to savour. Imam Bayildi literally means “The imam fainted”. It is said that an imam (Muslim priest) swooned with pleasure on tasting the dish. This is the story you’ll hear repeated right across Turkey. There is however, a rather less charitable account that has the imam fainting at the great cost of the olive oil used to make it. Here’s how the story goes:

“A long time ago there lived a Turkish imam, well known for his appetite and love of good food. One day he surprised his friends by announcing his engagement to the beautiful young daughter of a rich olive oil merchant. At this stage, the imam’s friends were not aware of her abilities as a cook. Part of her dowry was a consignment of the very finest olive oil. The wealthy merchant gave the groom twelve great jars of the prized oil, each one as big as a man.

Following the wedding, the young daughter quickly revealed her talents as a Turkish cook and every day prepared a special dish for her new food-loving husband. Stuffed aubergine in olive oil was his absolute favorite, and so he asked his wife to make it for him every night as the centrepiece of his dinner. Being a good wife, she did as she was told, and made the delicious dish for twelve days in a row. On the thirteenth day, however, when the imam sat down to dinner, his favourite aubergine dish was starkly absent. The imam demanded to know the reason for its disappearance. The bride replied, “My dear husband, I cannot make your favourite dish anymore, for we have no more olive oil. You will have to buy some more.” The lmam was so shocked by the news that he fainted. And so ever since that day, his favorite dish has become known as ‘Imam Bayildi’,(the imam fainted).”

Preparation:
The dish is simple to prepare, but it does take a little while to cook (about 1¼ hours) and cool (it is supposed to be eaten at room temperature), so make sure you allow enough time. And check that you have enough olive oil!

Wash the aubergines well and remove the stems. Peel the skin lengthwise in ½ inch strips, to give a nice striped effect. This will help the aubergine absorb the flavours while cooking, even if the stripes disappear to some extent when cooked.

To salt or not to salt:
There is a debate about whether it’s necessary to salt aubergines or not in order to drain out any bitterness. Modern varieties are apparently less bitter than they used to be, and if you choose small and very fresh ones there is probably no need to bother salting them. If you are of the salting persuasion, then at this stage cover your aubergines with salt and allow them to rest on kitchen towel for about half an hour. Afterwards simply wipe away the salt.

Cut the aubergines in half (lengthwise), and cut a slit lengthwise in the fleshy side of each of the halves, stopping a little short of the ends. Cut onions in half (from tip to tip) and then chop into slender wedges.

Heat half of the oil in a heavy based saucepan or frying pan with a lid, and add the onions. Cook gently until they are transparent. Add the chopped garlic and cook for about a minute. Pour this mixture into a large bowl, and stir in the chopped tomatoes, parsley, salt and pepper, as well as the lemon juice, sugar and water, to make the mixture used for stuffing the aubergines.

Heat the remaining oil in the pan until it starts to smoke, then add the aubergines and cook over a high heat for about 5 minutes, until they are lightly browned all over, but still nice and firm. Then remove from the heat.

Arrange the aubergines in the pan with fleshy sides upwards, and spoon the filling mixture into the slits. Try to stuff in as much as possible, and spread any remaining filling on top. Put a lid on the pan and cook over a gentle heat until tender (approx 45 minutes). Check on it occasionally, adding more water to the pan only if it is getting dry (aubergines do release a great deal of water).

Alternatively, you can arrange the stuffed aubergines in a covered oven proof dish, and cook for about 45 minutes at 180 degrees.

Remove from the heat, and let the stuffed aubergines cool to room temperature. Serve as an appetizer/meze, or as a light meal with fresh bread and/or yoghurt. It can also be refrigerated and served refreshingly chilled. Enjoy!