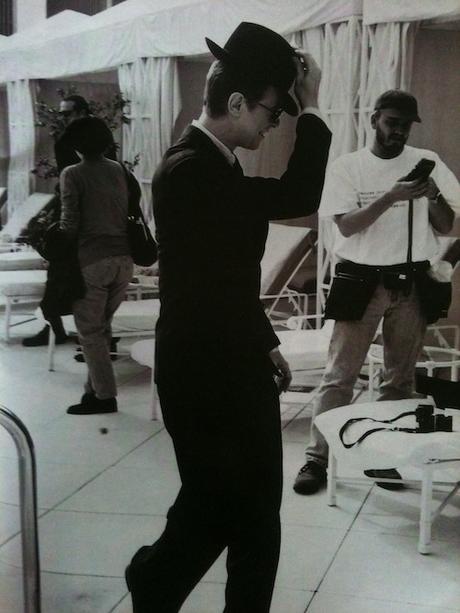 when you were at school, did you have a career plan?
i had a plan from when i was eight. my father brought home all these american records…there was this one by little richard, and that was that, i was sold. when i heard that, i thought, god, i want to do that. actually, my ambition at eight or nine years old was to be one of little richard’s sax players, and that’s when i got my first saxophone… i had to get a job as a butcher’s delivery boy to start paying for it.

were you interested in clothes when you were a teenager?
yeah,immediately. 1961 was when i was really into clothes. i left school at fifteen and started copying a bloke who used to go up on the train to london with me… he was, like, top mod of his own area. he wore italian jackets with white linen jeans. boy, that was cool!… chelsea boots with fluorescent pink or green socks and eye shadow that matched the socks he was wearing that day, and he had a slight bouffant hairstyle, parted in the middle. he was somehow tough looking, too, a real heavy-weight. but he had eye makeup on! and the jarringness of it was really weird. i thought, i like it - i feel like that, not one thing or the other, you know.
so that was the start of your wearing makeup?
yeah, i still do
what did your mum say?
oh, she didn’t like it, but she didn’t ever try to stop me.
had you left home by then?
yeah, i left home very quickly.

what inspired your interest in androgyny and bisexuality?
there were two things i came across that really excited me. one was a book by john rechy called city of night…the other was this film, the queen, a documentary on drag queens… for most of the period when i was going through the bisexual thing, my attraction was always to really beautiful transvestites or drag queens, whatever…there was something about that world that was so enticing to me.
the glamour? the outsiderness?
it was the outsiderness more than anything else. and i liked the people involved in it, because they were so knowledgeable about things, like music. gay clubs in london were the only clubs that had decent music.

did you ever think that sadness was necessary to you as a musician?
i never thought i would be very happy, ever. i presumed that’s what i had given up to have this ability to produce magic with music. and then you look at other artists in history and say, well, they were like that; they were always very stoned and had miserable lives, but look what great art they did. you’re not willing to look at the artist who was balanced and harmonious in his life and still was a great artist. and so you kind of resign yourself to it.