A Bruxelles with Death

to most travellers the idea of losing their luggage is frightening; as an avid shopper, i am not too disturbed by it and view such misfortune as a particular opportunity to indulge. of all the many horrible travel tales people lived to tell, i can’t share much. i’ve not been held to randsom, mugged neither have i been arrested nor abducted. not yet anyway.
i did however manage to live through an incident which had me parading through europe for a month wearing sunglasses indoors and out, day and night, like some high profile fashion editor or hungover film star.
having connected to brussels from schipol, we were going to see the el greco and frieda kahlo exhibition at the bozar aka le palais des beaux-arts.
after an early breakfast we strolled through the parks of brussels since it was such splendid weather, park de bruxelles, petit sablon etcetera. obviously i did not account for the amount of metabolic action and my body decided to revolt soon after lunch. as a diabetic one has to constantly keep these things in mind and being petrified of a scene, i usually do. for those not familiar with the bozar; victor horta created this art deco building as a centre for the arts. it spans eight levels in all with labyrinthine stairwells connecting all the different aspects, concert hall, a recital room, a lecture and exhibition rooms. at some point during my vist of the remarkable show, i realised that i should get a snack, and fast… i tried to navigate myself to the nearest exit, but there was also a part of the building under construction and so was my french. with unrealistic optimism i ventured at last onto the street to find a cafe where i could get a fruit juice or something sugary, by this time i was so incoherent that i had to nearly assault the proprietress for a cold drink. this was all too late already and as i walked onto the sidewalk to catch my breath, i passed out.
the next thing i remember was coming to inside the ambulance with a bunch of paramedics. i revolted and fought like a russian railway worker which only made them think i was epileptic. they gave me a tranquilizer of sorts and hours later i woke up in the emergency rooms of st pierre.
after a brief and nasty multi-lingual discussion about travel insurance and release forms we went back to the hotel. i was not interested in much else. i was en-route to paris for some interviews and with shock realized my apprehensive appearance. the next day i was shopping for large sunglasses. la vanité de la visage. 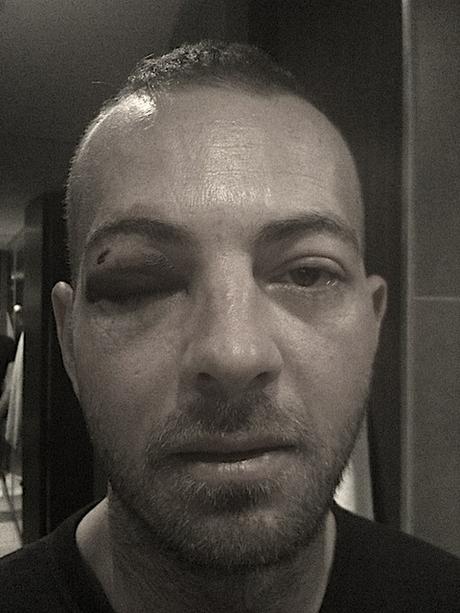